In this incredible meridian theatre, Meridian’s DSP7200SE digital active floorstanding loudspeakers have been described by The Absolute Sound as  “a magnificent speaker in the flesh… superbly finished in highgloss piano lacquer, every sign of great attention to detail in its design and construction.” In this project they are hidden behind a projection screen with ten (10) other Meridian in-wall side and rear speakers, and six in-ceiling speakers for a reference 13.4.6 Atmos configuration with 23 speaker channels in all.

This makes this project the the largest channel count of any Meridian theatre system in the world.

The latest high-end audio designs for home cinema typically have far higher channel counts than the normal 5.1 or 7.2 channels that are common place for a more enveloping surround performance. By using the Trinnov immersive processor we had the ability to re-map the speaker configuration for this more complicated layout. A great example of this is the front wide speakers. If you imagine a sound transitioning around a room in a typical system there would be a jump between the front left or right speaker to the surround speaker. This gap in the transition disrupts the suspension of disbelief. By placing a number of surround speakers around the room it becomes very hard to localise any speakers, creating a far more enveloping performance with impressive seat-to-seat consistency.

Another feature of a high- channel count system is the complexity of the diffusion, with far more waves interacting in the space. This helps increase overall clarity and envelopment once acoustic treatments are added in critical locations. Spinning around While the Trinnov Altitude AV processor is capable of advanced re-mapping for any speaker locations, every possible step was taken to get the initial placement right, following Trinnov’s recommended positions, CEDIA’s white papers and Meridian design documentation as well.

We worked with multiple suppliers to get the best-balanced system for the room. We had direct contact with both Meridian and Trinnov, as well as their local distributor receiving advice from all parties. And this was actually an unexpected challenge, perhaps because of the scale and calibre of the project — they each had slightly different technical advice. So we had to balance these opinions in conjunction with CEDIA standards to get the best technical solution. Especially since some existing structures were causing problems with the overall design. We had the tricky task of persuading the owner to turn the entire room around from the original conception. There was a structural concrete beam in the ceiling which was  600mm high and 200mm wide and placed almost in the centre of the room. It completely dictated the orientation of the room and all lines of sight. Moving the beam was not an option, but it made the initial designs very difficult. The room was to seat eight people in comfortable theatre style seating, one of the client’s non-negotiable criteria, along with a wall-to-wall screen, and a request for seating as close to the screen as possible. This would all be challenging enough given the room size (4 by 8.5 metres), but with that concrete beam in the middle, preliminary calculations couldn’t combine all these criteria in a single working design.

We realised it could work if the whole cinema faced the other way. With the help of our 3D renders, we were able to convince the client to re-orientate the direction of viewing. Being able to walk the clients through the room design helped to create some excitement and more clearly established expectations. The final design includes the requested front seat full-on viewing, which was on the limit of the recom-mended distance and viewing angles. It might be a little close for most people, but in this case it was just right for the client brief. Some of the side seatings are also very close to one side wall, so instead of having a single side speaker we split the side speakers and had the Trinnov re-map the image between them.

Keeping bass in its place

The client was also particular about the cinema being able to deliver a powerful bass response, their music preferences being predominantly electronic and hip-hop.

We believe this is one of the keys to good design. Understanding the clients’ tastes allows for greater personalisation of the system. There are four subwoofers used in this room to achieve the necessary result, and they’re strategically placed in the quarter points of the room, the 15-inch front woofers low in the room while the rear 12-inchers are on a higher plane. All of the subwoofers are wall-mounted with resilient ‘Isomax’ brackets to decouple them from the walls. This placement gave us an incredibly well-balanced bass dispersion across the seating positions — indeed we worked out the bass modes of the room throughout our design process, and adjusted the seating to these. We then balanced this within acceptable viewing angles and screen sizing to achieve our goal.

In combination with the request for bass came a counter-stipulation that the room be isolated for sound from the rest of the home. Thanks to structural concrete, we had a good basis for this, as the room was effectively a bunker! To enhance the soundproofing we used resilient mounting of any wall-fixed equipment, and we included isolation of the dual solid entry door with Raven Products’ seals. Even the lighting was considered within the structural isolation containment of the room.

One of the key criteria that we wanted to achieve for the imaging was a high foot-lambert brightness for a 4K HDR-capable video signal. The screen is a 157-inch-diagonal Stewart Filmscreen microperforated Studiotek 130, in a 2.35-to-1 aspect ratio, and a Lumagen Pro video processor is used prior to the Sony laser-source projector to ensure HDR tone mapping within a Rec. 2020 colour space, and also to incorporate Lumagen’s cunning method of NLS (Non-Linear-Stretch) to shape 16:9 content to fill the full 2.35:1 screen. Even with the room reversed, that concrete beam still made the throw distance and screen size incredibly tight. It was decided that the best result would be achieved by accommodating the projector in front of the beam, mounted to the ceiling without an enclosure or hush box of any kind.

Achieving a ‘reference level’ for the sound was the determining factor in the choice of the Meridian high- efficiency loudspeakers. These active loudspeakers would generate the necessary 105dB level across all seats while retaining the highest possible quality. This cinema is completely ‘digital active’ by using these Meridian loudspeakers — every speaker driver in the system has a dedicated amplifier. Typically reference-level [105dB] systems use a professional-type speaker, for their high efficiency and ability to create high SPL. This often involves the use of compression drivers which may not have great off-axis response and can also be quite harsh in their reproduction. Whereas the Meridian speakers have very high SPL due to their active design, yet they use more residential- style speaker design we’ve found Meridian to be a great balance between power and finesse. This system is astonishingly musical at reference volume.

Bass management was fully employed, and acoustic treatment critical to ensure the many sound reflections generated from the multiple speaker channels would be correctly treated.

For a clean outcome we concealed the entire speaker package behind acoustically transparent fabric. The front three speakers are spiked to the timber plinth below them, isolating these from the structure, with 300mm from the face of the front speakers to the micro-perforated screen to ensure no comb filtering effect and a clean transition from the Beryllium tweeters. We installed absorptive-wadding in the front wall, using different thicknesses of this material to cater to various frequencies. In the front corners, we made bass traps by crossing and filling the corners with dampening, and we also vented the seating plinth along the face of both steps, filling the inside with acoustic batts to create a bass trap. We implemented a ‘sawtooth’ architectural wall structure, allowing the side speakers to be placed on an acoustic axis with the primary seating positions.

Anthony Grimani MSR acoustic panels were utilised throughout, with absorber boards and panels on the side walls, 3D and 2D diffusion towards the centre of the rear wall, the rest filled with absorption material. The rear corners of the room were filled to control bass frequencies in this area.  All solid surfaces, such as the ceiling and various wall sections, were thoroughly coated with ‘Green Glue’ adhesive and screwed tight, while each of the wall-mounted speakers had their fixings reinforced. Even the carpet underlay was selected carefully, a 14.5mm wool-blend, air-step type for extended absorption.

The large existing window in the rear of the room was another problem, and not only for the possibility of letting in light, which was prevented using a variable blackout blind system from Lutron Sivoia. The window itself would almost certainly be a reverberant surface and even potentially susceptible to cracking at high SPLs. We treated it with a specialist 3M coating on both sides — it’s a coating designed for bomb blast and explosion mitigation, and it greatly strengthened the surface.

With the room complete, each of the eight seats in the room had an individual acoustic calibration using Trinnov’s four-capsule 3D microphone. The Len Wallis team then ‘weighted’ the sound to create different scenarios with the best possible sound for various seating combinations. So a “Couple” setting weights the entire audio image to the front middle ‘love seat’ for when the room is being used by the parents. A ‘Family’ setting ensures best results in the middle four seats. Finally a ‘Guest’ mode delivers best possible sound to all eight seats. These settings, full AV control and the HVAC system are all available through the Savant control application.

The Altitude32 offers undisputed leadership in 3D sound, leaving nothing to chance: high channel count, huge processing capabilities and exclusive patented technologies to unleash the full potential of immersive sound, regardless of formats and speaker layouts. 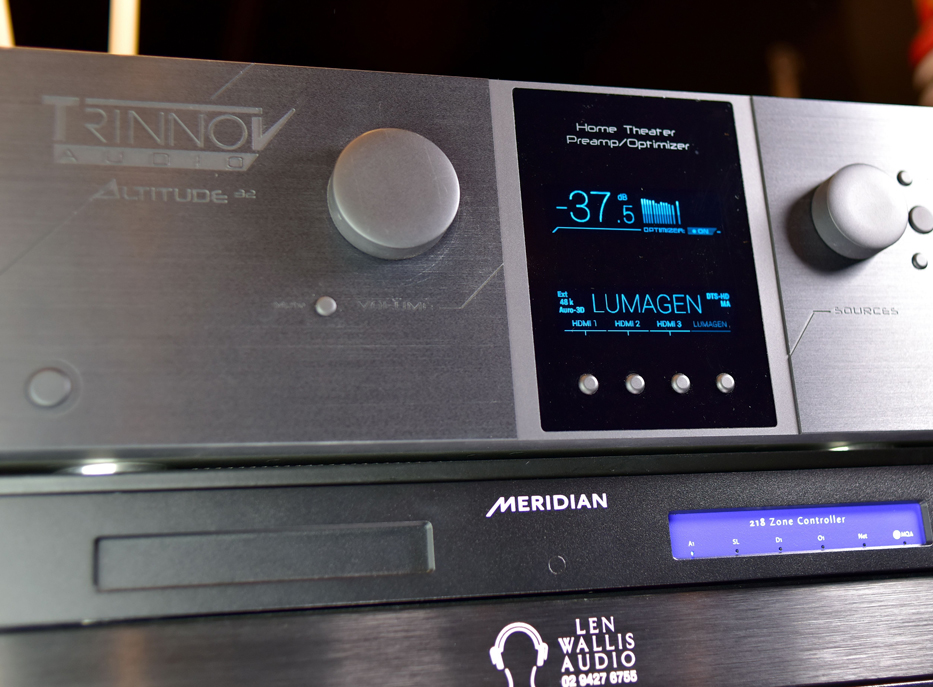 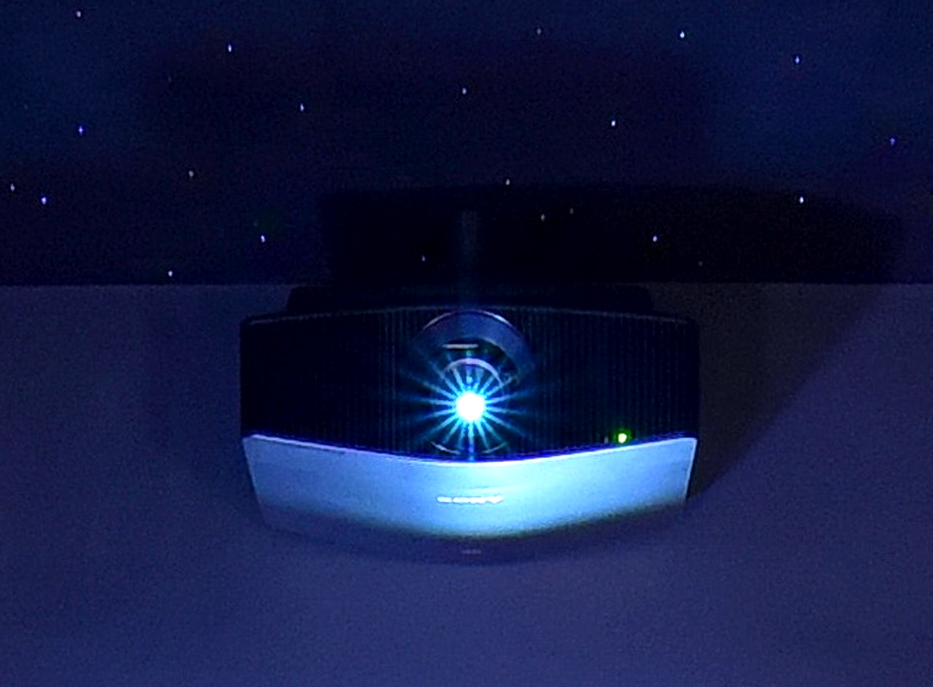