When Len Wallis Audio was asked to work with two of Sydney’s most respected architect’s and builders on a new build cinema, being Bruce Stafford Architects and Joe Fuda, Innovative Building we knew the team effort between ourselves and them would deliver the finest of home theatre results, and it did.

Alberto Vangi (senior custom sales) initially sat down with the clients to determine and put together the cinema, where once this was done, project manager Onur Gursen and documentation Auto CAD draftsman Shaun Peffer worked closely through the preparation stages all the way from start to finish guiding the installers, programmers and even Mick Peaker from Avical doing the video image ISF Calibration.

A 7.2.4 Bowers & Wilkins Premium Cinema Speakers combined with two (2) Sunfire subwoofers with the main front left, centre, right speakers located behind a perforated screen to ensure the most accurate sound reproduction when viewing the screen. To have the sound come from behind the screen is also the most immersive and accurate means of drawing the viewer in. 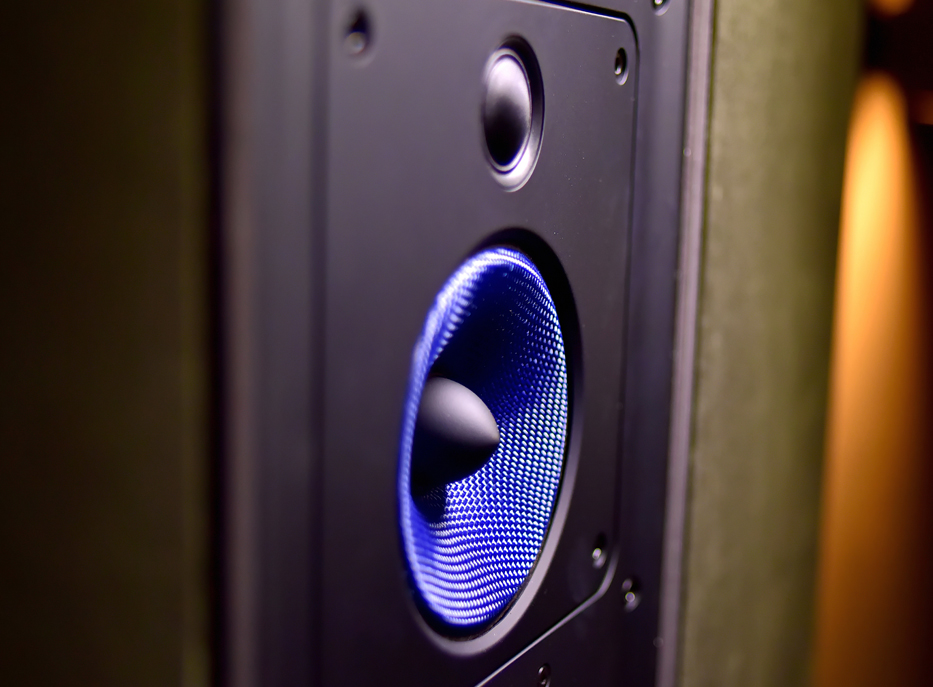 This screen features Stewart’s StudioTek 130 screen surface, long recognised as the industry reference for home theatre applications. Though with the widest range of screen materials to choose from you can be assured that the most appropriate screen is employed in each and every application. The 84mm wide Deluxe Screenwall frame is covered with Stewart’s black velour VeLux applique, providing a luxurious finish while absorbing image overscan. 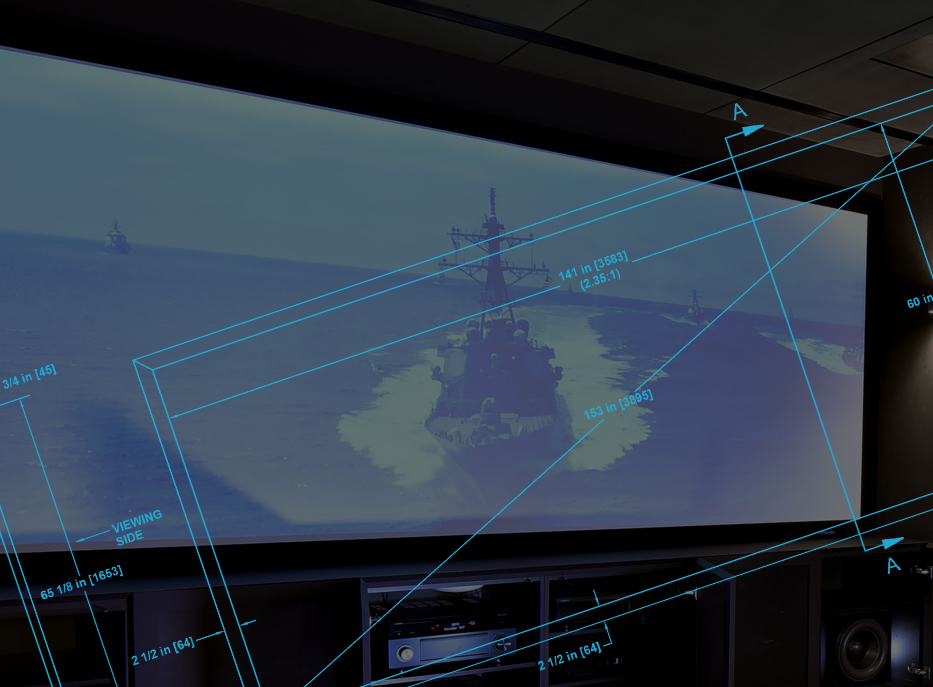 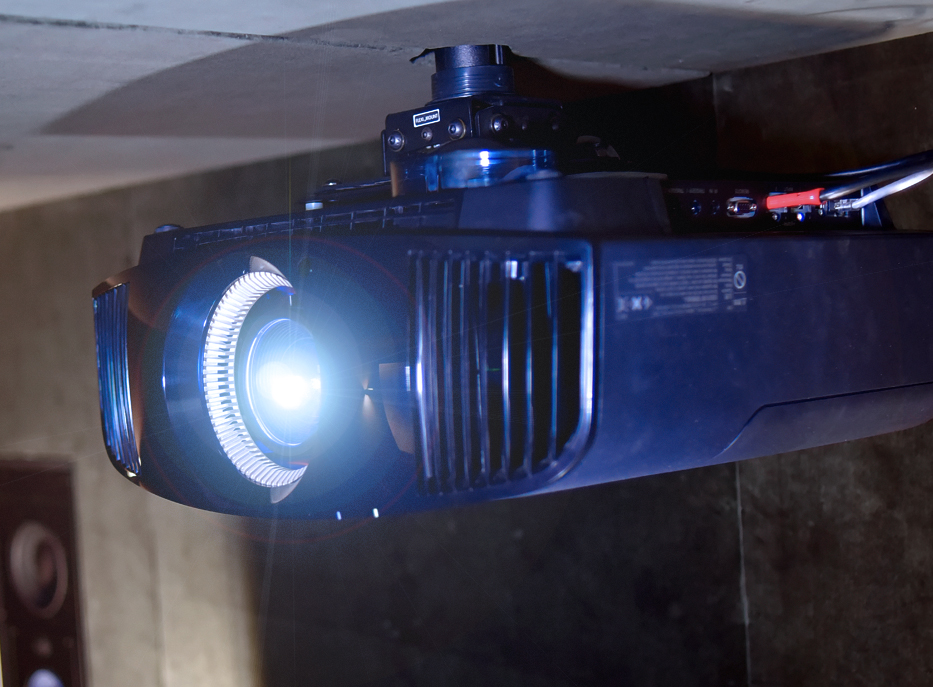 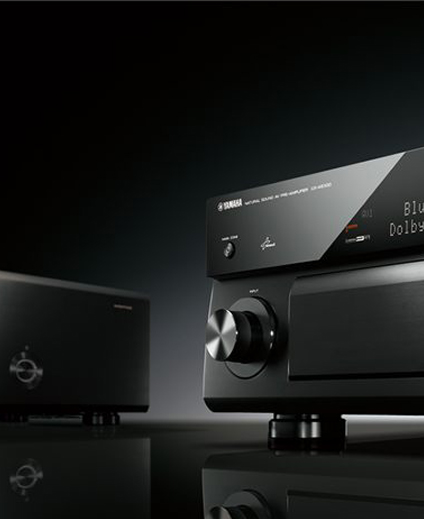 To power and look after the Dolby surround sound processing for the main front 3 being, left, right and centre, surround in wall speakers being 2 sides, 2 rear back wall and the 4 ceiling Dolby Atmos speakers a Yamaha Pre and Power combination was used. Handling all the latest surround sound formats and 4K HDR HDMI Video Switching the Yamaha delivered on all accounts. Also by not using an all in one amp for a dedicated cinema the impact and sound quality is taken to a next level by instead using separates, meaning a pre and power amp. Better control in the sound and the speakers clearly sound better too.

Details that make a difference

Bruce & Joe didn’t leave an inch forgotten, with acoustic treatment within the room, lighting, colour and finish choices along with the overall build quality and design really giving the room the sense of literally an even better movie experience than being at the cinemas, in your own home.
Onur during his project management made sure that all the wiring was correctly in place, holes all positioned for the later installation of the B&W speakers taking into account the acoustic treatment. So that the architect and builder were also able to deliver on their promise in regards to the timing of completion, Onur closely monitored the fit out period. During fit out the installers carefully wired together the electronics and mounting of the projector, screen and each of the speakers.

Alberto also making sure that the purchased system would not only live up to expectations but exceed knowing that Len Wallis Audio has been specifically chosen by the client based on their 40 years of experience and reputation.

The finishing touches on the room from the viewer’s seat is an all in one iPad touch screen controlled via the RTI control system. Once programmed the room could be used with the simplest of ease with minimal button presses and seamless reliability and control. It would also function faster as macro functions were programmed.

For example pressing the Blu Ray icon, it would turn the Yamaha Pre and Power on, go to the correct input on the Yamaha, turn the projector on and it’s correct input, simply leaving you just having to put a Blu Ray disc inside. We even programmed multi format so that you can view both 16:9 and 2 35:1 via the Sony projector with the touch of a button. 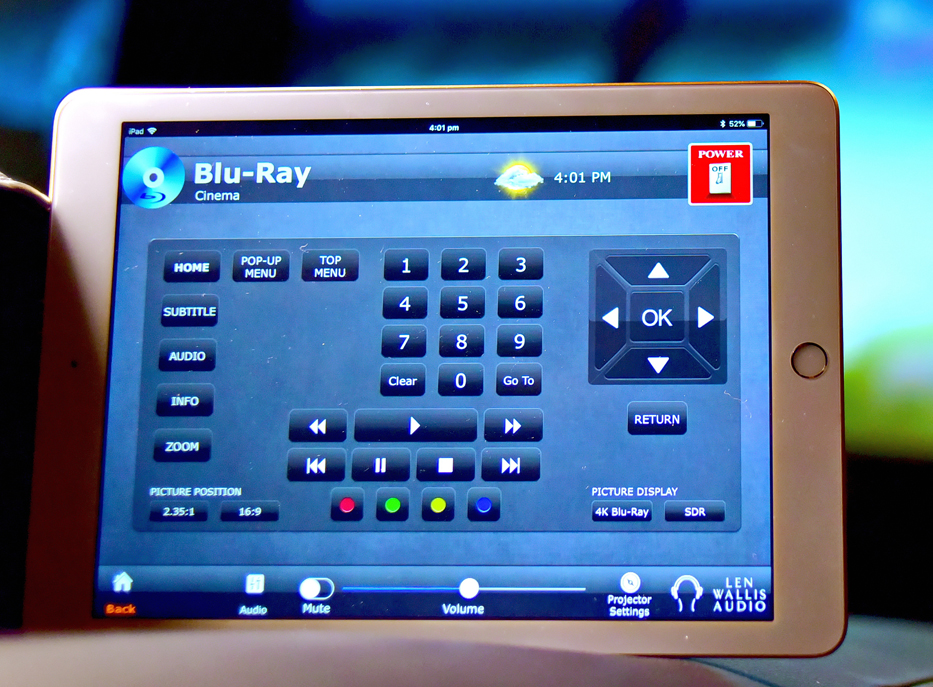 Alberto making sure that the purchased system would not only live up to expectations but exceed knowing that Len Wallis Audio has been specifically chosen by the client based on their 4 years of experience and reputation. Project manager Onur made sure that during the build all the materials and networking where in place as needed. And with Bruce and Joe’s involvement, we have created a very comfortable space for the whole family to watch movies, sports, concerts, TV shows on a 151 inch screen with an incredible picture and sound quality. For this very reason the enjoyment factor for the customer has been is significant and the outcome has exceed their expectations.

It’s what we aim to do with every installation at Len Wallis Audio.

Our partners on this project 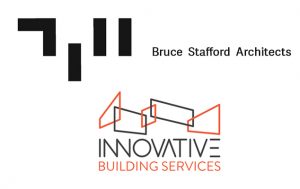 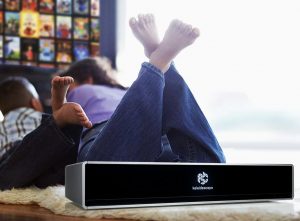 Why our customers love us

We would like to take this opportunity to thank you and your staff for a first class job at our new home. We have been most impressed with the professionalism and care taken by all Len Wallis staff with every aspect of our job, right from the very first consultation through to the handover today. The whole package was delivered in the most professional manner and we are delighted with the end result. Doug, Balmoral

Alberto, a note long overdue – the team provided for the installation of our entertainment center was just stellar. They each of them went out of their way to be helpful, they were careful of everything in the house (under construction at the time!), they demonstrated the patience of the saints in interactions with other contractors on site, and above all else, professional in the extreme – everyone knew exactly what they were doing, and did it exceptionally well, working flawlessly as a team. James, Waverton